Sautéing is a cooking method where one quickly cooks small cuts of food in a small amount of oil or fat in a pan over moderate heat. The oil or fat choosen should have a high enough smoke point to avoid burning (peanut oil is an excellent choice, while non-clarified butter would be a poor choice). Food is chopped, sliced, diced, or minced finely to facilitate fast cooking. The food in the pan should frequently be in motion, either through stirring or shaking the pan back and forth to flip the food. While the food is sautéing, it will make a sizzling sound. The food will brown, but the texture and moisture of the food will be mostly preserved.
Sale 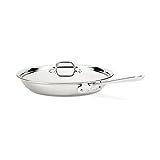 What’s the difference between searing and sautéing?While both sautéing and searing are traditionally both done in a fry pan or skillet, sautéing is different from searing. Searing is a cooking technique to brown only the surface of the food, such as a large steak, a pork chop, a filet of fish, or a chicken thigh. It uses high heat in order to quickly develop the crust without cooking the interior of the food. The term sauté comes from the French verb, sauter, which means ‘to jump’, referring to the way the food jumps when the cook shakes the pan.There is a misconception when it comes to searing. It is commonly thought that searing locks in the juices of the meat; it does not. However, searing produces a chemical reaction known as the Maillard reaction, which is responsible for the tasty brown crust you get after searing proteins. Searing can also produce fond on the bottom of your fry pan or skillet, which can then be deglazed and incorporated into sauces, gravies, and braising liquids. Just make sure you’re not using a non-stick pan, as fond won’t develop.Sautéing involves cooking the food fully and is usually done with smaller cuts of food, such as diced vegetables or thin cuts of proteins. It uses moderate heat in order to ensure even cooking and prevent overcooking and burning. Sautéing is perfect for softening onions and garlic, or for unlocking the flavour in aromatics such as thyme and rosemary.Ironically, a sauté pan is not the best vessel for sautéing because of its straight sides. Instead, use a fry pan or skillet with sloped slides as it facilitates flipping the food when the cook shakes the pan. For a double-win, the same fry pan/skillet is ideal for searing as well.
Sale

Back to Cooking Glossary

Simple Deep Frying Oil Solution if you Only Deep Fry a Couple Times a Year
MSG Myths: Is it really bad for you?
Best Cookbooks of All Time